Why does the Grate Wall of Fire fireplace grate work so well?

The Grate Wall of Fire features a unique, patented design. This drastically increases heat output, cuts wood consumption in half, puts an end to smoke in your home, and virtually eliminates the need to "tend the fire."
Conventional flat grates are inferior to this new, patented design, and are troublesome.
Common flat grate problems include the fire making little or no heat, the consumption of large amounts of firewood, smoke fills the home, the fire must be constantly tended to or it will go out, burning logs can roll out of the grate and onto the hearth, and the grate burns out after just a few seasons of use.
These common flat grate problems don't occur when using a Grate Wall of Fire fireplace grate.  The following explains this claim:

It's that time of year again!

Greetings! As Summer comes to a close and the temperature begins to drop the time has come to get ready for Winter. If you have a fireplace in your home you probably have no intention of using it as a reliable and effective heat source. That is because you have never heard of the Grate Wall of Fire fireplace grate. By simply placing this revolutionary grate in your fireplace every negative factor about wood burning in your home will be a thing of the past. Worried about smoke? The Grate Wall corrects problematic drafting problems that cause troublesome smoke puffs and downdrafts.

For more information about this amazing product please visit http://www.gratewalloffire.com/ 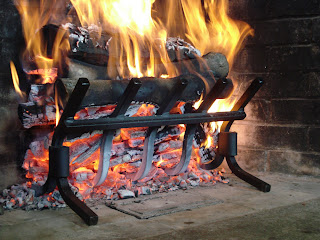 Posted by Grate Wall of Fire at 9:25 PM No comments: